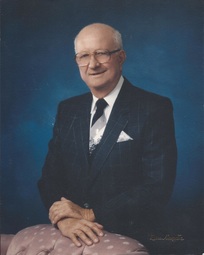 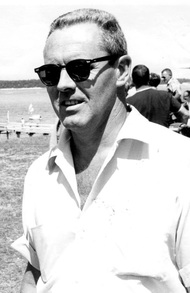 Dr. William E. Baker: 1971-1988
William (“Bill”) E. Baker was a native New Yorker, who began as a trumpet player and played at such venues as The Roxy Theatre and The Palace in New York City. While he served in the Marine Corps during WWII, he played with the Bob Crosby orchestra which included such notable performers as guitarist Al Caiola among others. Later he toured with Danny Kay and his orchestra.

While playing at the theaters in the city, he continued his education at Columbia University. Upon graduating, he became an instrumental teacher in the Huntington school district. In 1970, he earned his Doctorate Degree at Columbia University, and in 1971 became the Director of Music for the district. During his years as the director of music, he made it a point to make the Huntington Marching Band one of the finest in the country. They even performed at the Rose Bowl in California. And, under his directorship, the Huntington School Choirs made several tours of Europe during the summers of 1975, 1976 and 1977. He was also personally honored by the United States Marine Corps, of which he was a alumni, as the Marine Corps Band performed one of his own compositions in 1981.
He assumed the position of Director for the Huntington Community Band, a position which he held and loved from 1971until 1988. Among his other duties as director, he often composed new music generally honoring a local business which sponsored the band. 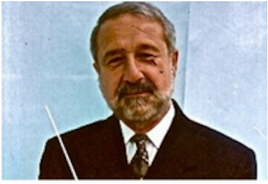 Robert V. Domencetti: 1989-2003
Bob is a native Ohioan and a graduate of Baldwin-Wallace College and Kent State University. He studied with conducting legends William Revelli, Fredrick Fennell, Frank Battisti, Fredrick Ebbs and Kenneth Snapp. During his 14 years of teaching in Ohio, his bands consistently received the state's highest ratings, honored as the "Ohio Band of the Year" and invited to tour Mexico.
​
Mr. Domencetti retired from the Harborfields Schools in June, 2000, where he was District Director of Music and Conductor of the High School Wind Ensemble and Symphonic Band. He has served as an Adjunct Assistant Professor of Music at Queens College (Aaron Copland School of Music), is a Past President of SCMEA and NYSCAME-Suffolk (New York State Council of Administrators in Music Education) and a former Suffolk County (Zone 14) Representative to NYSSMA (New York State School Music Association).

Domencetti  guest conducted many Nassau and Suffolk All-County Bands, the North Fork, Mid-Island and Hampton Music Festival Bands, the Nassau Pops Orchestra and, annually, the Northport Community Band.   Robert Domencetti has been honored as an "Outstanding Music Alumnus" at Baldwin-Wallace College (Conservatory of Music Achievement Awards, class of 1959) and has performed onstage in 20 musicals.﻿ 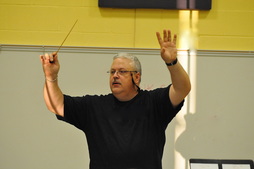 Mr. Gellert, a Manhattan School of Music graduate,  retired from a long career as a high school band director and then public school music administrator. During his tenure as a band director his concert and jazz bands routinely received superior ratings at music festivals in the Northeast. In addition, Gellert’s bands traveled and performed extensively on concert tours of the Eastern U.S, Canada and twice to Great Britain, Italy and Austria under his baton.  Since retirement Tom has served as the Student Teaching Supervisor for SUNY Fredonia School of Music.

​Since 1994, Tom has served as the managing state editor for the New York State School Music Association and has brought the NYSSMA School Music NEWS magazine to national prominence as one of the most widely read and circulated professional state music education journals in the U.S.
Tom is also in demand as a guest conductor and also serves as a NYSSMA All-State Brass and Major Organization adjudicator. He maintains an active private horn studio and continues to perform in the metropolitan area as an orchestral horn player / chamber music performer. 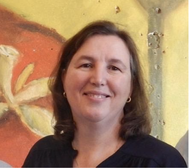 Vickie Henson:  2022 - Present
Vickie Henson holds a Bachelor's Degree in Music Education from The Crane School of Music, SUNY Potsdam, and a Master's Degree from Stony Brook University.  In addition to college degrees, she completed extensive masters coursework with a concentration in Technology. She subsequently earned the Suffolk Edge Teacher Award for Technology, the ASSET Bright Light Award for Technology, and the Fred Poldolski Most Innovative Use of Technology Award for her work implementing technology into her music classes.

​Vickie recently completed her 34th and final year as a music teacher in the Elwood Union Free School District at John Glenn High School.  Her time was spent teaching her students to love music, and to be a part of the bigger picture in their community.  Her responsibilities included Concert Band, Marching Band, Jazz Band and AP Music Theory.  Ms. Henson’s  bands have successfully performed in festivals and competitions across the eastern U.S and have played concert tours in Rome, Venice, Florence, Vienna, Salzburg and Prague.

In 2004 Ms. Henson joined the  Huntington Community Band as a member of the percussion section and has for the past several years served the Community Band as the Assistant Conductor.  In addition to her conducting duties, Ms. Henson built and maintains HCBand.org, the band's website.